A transgender school teacher in Ontario, Canada is trending on social media following parents’ complaints that her huge fake breasts are a distraction and making their wards skip her classes.

Kayla Lemieux, a manufacturing technology teacher at Oakville Trafalgar High School in Ontario, Canada, went viral and sparked controversy after photos of her wearing the synthetic boobs to class were shared online. The photos and videos are presumed to have been taken and shared on social media by her students without her knowledge.

Lemieux’s clothing appeared to have been stretched out by the prosthetic breasts in the pictures, and the nipples bulged out heavily.

Some of Lemieux students are said to have skipped the Manufacturing Technology class due to becoming distracted.

Some students have recorded images of the trans teacher at Oakville Trafalgar High School in Ontario, Canada and put them on social media: pic.twitter.com/QzsFtqauZq

However, reacting to the outrage and parent’s complain in a statement on Monday, the school defended their employee and explained why they chose support Lemieux’s gender expression.

According to the school, interfering or criticizing the trans teacher would go against the Ontario Human Rights Code.

“We are aware of discussion on social media and in the media regarding Oakville Trafalgar High School. We would like to take this opportunity to reiterate to our community that we are committed to establishing and maintaining a safe, caring, inclusive, equitable and welcoming learning and working environment for all students and staff.

“We strive to promote a positive learning environment in schools consistent with the values of the HDSB and to ensure a safe and inclusive environment for all students, staff and the community, regardless of race, age, ability, sex, gender identity, gender expression, sexual orientation, ethnicity, religion, cultural observance, socioeconomic circumstances or body type/size.” The statement read.

Speaking to the Toronto Sun, a student at the school, Owen LaPlante, confirmed that some of her colleagues find the teachers’ breasts uncomfortable.

“I’m okay with it. I know some of my friends are a little uncomfortable with it, but I think she should be able to express herself however she wants to.” Owen said.

See more photos of the teacher below, 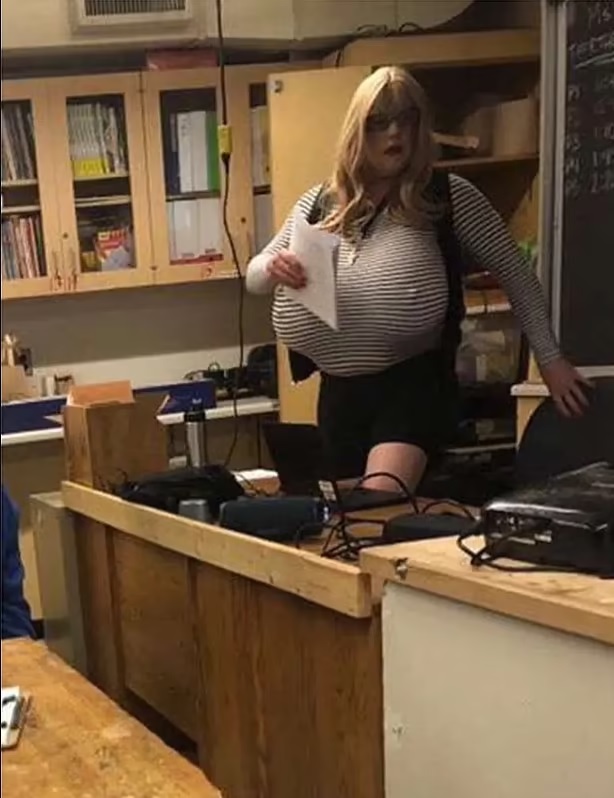 Published on 5 hours ago 1 min read